Although it’s been said there’s been some jumps in my career, to me there’s always a pretty clear motivation for all my work – people and engagement.

I was born and brought up in Gillingham, Kent. At 18 I left for Bournemouth to study BA (Hons) Communication and Media Production for three years, where I achieved a first class degree. After a post-graduate certificate in Stage Management from the Welsh College of Music and Drama I embarked on a freelance stage management career.

I worked at a variety of repertory theatres around the country before moving to London where I worked in the corporate arena for a few years. I later returned to theatre, with a focus on production and stage management of community and site-specific projects – that breaking down of barriers and getting people involved has always fascinated me, and projects took me from village halls to Oxford’s mini factory. I relocated to Birmingham and, becoming settled, I tried a new administrative career, working in two local children’s’ homes.

In 2003 I joined The Play House, an educational theatre charity, as Administrator – combining my theatre and administrative experience, and continuing that through line of engagement. After several years as their General Manager I subsequently became Chief Executive, all the time being the chief fundraiser. From tackling extremism to supporting numeracy, from school halls to botanical gardens and museums, the participatory work we produced was effective and engaging, and this role really broadened my experience and interest in the wider community and voluntary sector.

After 6 years running the company I began a new challenge, becoming the Development Manager of The Wildlife Trust for Birmingham and the Black Country – more than just the conurbation’s largest conservation charity, as an organisation it puts wildlife and people at its heart. After 3 years I embarked on my current adventure, this time as Chief Executive of Bromsgrove and Redditch Network (BARN) – a charity supporting local people and communities, promoting volunteering and supporting community groups. 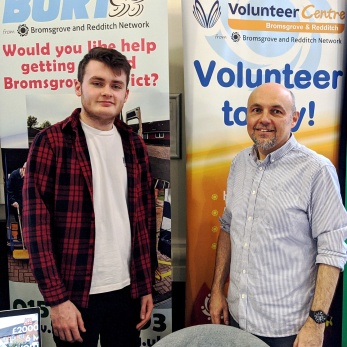 Top Left: Me in 2001, operating a performance of Hamlet in Oxford’s Mini Factory – an extraordinary experience (find out more here). Right: In 2014 (I’m 3rd from left) having taken part in meadow creation at Sedgeley Beacon. Bottom left: With BARN promoting our Volunteer Centre and community minibus.